Genuine Builders, a South Dakota contractor hired to work on the Co-op’s new 2.8-million-bushel grain facility in Walnut Grove, MN, has been identified as a top user of a controversial H2B visa program that allows companies to employ foreign guest workers for construction tasks that are typically performed by locals. Between January and July 2016, Genuine Builders applied for nearly 900 H2B visas for construction laborers –a fifth of the roughly 4,100 applications filed across the nation during that period.

“Here in Southwest Minnesota there are twice as many people out of work as full-time job openings, so there’s no excuse for hiring temporary foreign workers” said Mankato Building Trades President Stacey Karels. “Unfortunately, Genuine Builders knows how to game the system. That’s why we’re taking to the airwaves to warn our neighbors what they’re doing to our local communities.”

Genuine Builders claims that the company has difficulty finding workers. But in one of the radio spots, Local 563 member Jose Navejas describes his unsuccessful efforts to get a job on a Genuine Builders project. “It took me three visits just to get an application, and I was told I’d be arrested if I showed up again,” according to Navejas, who has lived in Southern Minnesota for 30 years. “The message I got was that U.S. citizens shouldn’t bother to apply.”

Robert Krueger, a family farmer and part-time construction laborer living in Tracy, MN, also chose to participate in the campaign to express his frustration with Meadowland’s contracting choices: “I’ve taken my business to Meadowland for years, and I always thought they cared about people like me,” said Krueger. “I can’t believe they brought in foreign workers when so many locals need the jobs.”

Karels hopes the regional radio campaign will encourage groups like Meadowland to hire contractors that employ skilled local workers. “Our members are your neighbors. Why not give them the opportunity to earning a living while they help build Greater Minnesota and put money back into the local economy?” 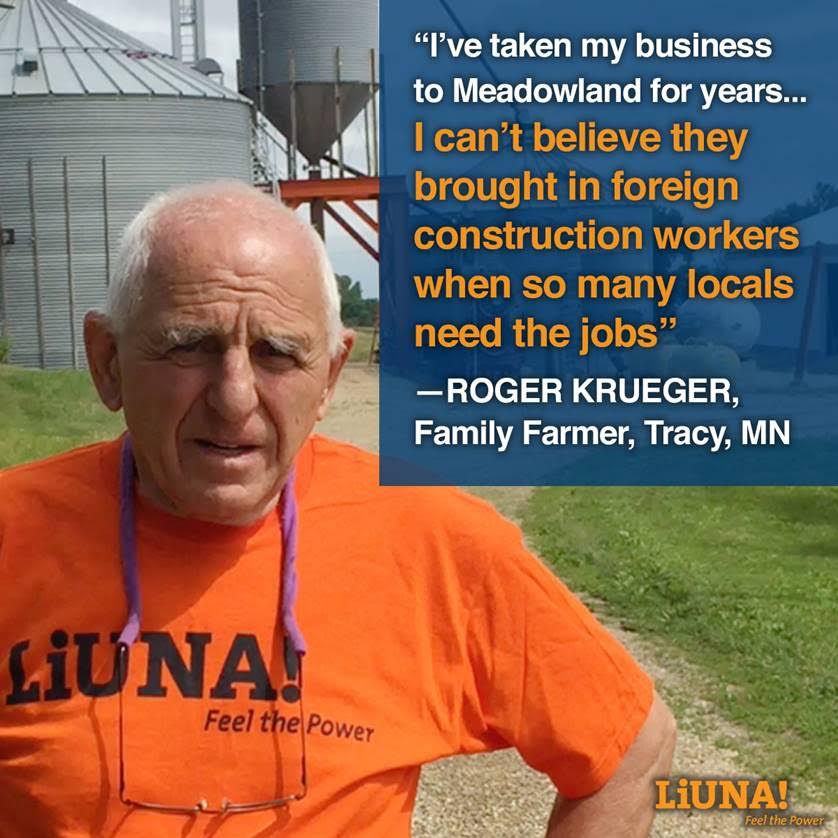